Today marks the first entry that will form part of the Nobel Prize in Economics Profile series.

My purpose in forming this series is twofold:

Accumulating these profiles, and providing, not only a summary, but an opinion on each, will hopefully provide various rewards: economic knowledge, true social science awareness and inspirational accounts to learn from.

The premise herein: one has to study the events of the past, to live the active present, which ultimately leads to envisioning a future.

One of my greatest regrets was to have approached mathematics begrudgingly during my formative years. Had I gone beyond the usual dry learning approach and realized the philosophy behind the subject and how speaking it would serve me in multiple forms, I wouldn't have waited until college to take it seriously. Any mathematician, math teacher and math enthuthiast can attest to its beauty.

Mathematics is usually an underestimated disciplines, yet anyone who decides to venture into the private sector can surely add value. When it comes to Economics - the following winners, were not only fluent in Mathematics; they used it to their advantage; revolutionizing economics from thereon.

So, without further ado:

The Sveriges Riksbank Prize in Economic Sciences in Memory of Alfred Nobel 1969 was awarded jointly to Ragnar Frisch and Jan Tinbergen "for having developed and applied dynamic models for the analysis of economic processes"
Ragnar Frisch Quick Bio: 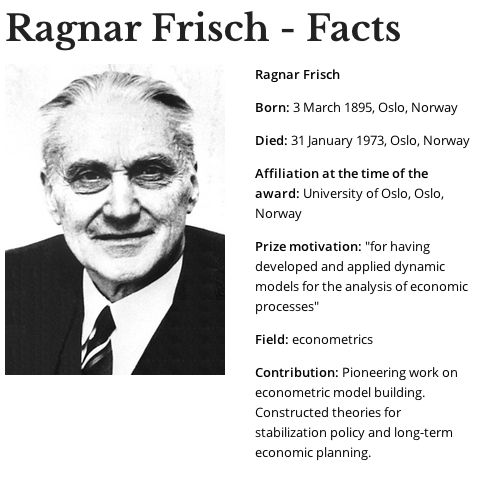 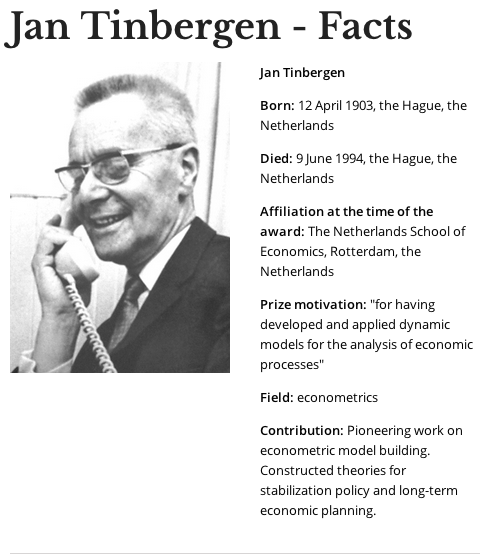 These two Economists revolutionized the field of Economics, having founded Econometrics - the discipline that gave way to the formal quantitative analysis that most economic concepts and theories lacked until that point.

Jan Tinbergen also (assumedly - but surely not a mere factoid) promoted the terms "Macroeconomics" and "Microeconomics", before these two economic branches were in common use.